Three original plays will premiere on stage June 4 at Tarkington

The Carmel Center for the Performing Arts has awarded commissions to three teams of local artists to develop original works for a special event and live stream on June 4, and tickets are on sale now.

The New Works arts commission project, currently in its pilot year at the Centre, is designed to promote and support active artists and artistic communities in the region in an inclusive way by supporting the creation of new works in all arts disciplines from the scene. Each winning entry will receive a cash prize of $2,500, technical support to adapt the performance to the stage, and on-stage rehearsal time prior to the performance at the Centre’s Tarkington Theatre.

The winning proposals selected by the jury are:

This short play will explore the complexities that women face when dealing with external and internal challenges in the workplace. Six actresses – three younger and three older – will portray three characters at the start and end of their careers in medicine, education and business, showing how their stories have evolved over a period of 50 years. Burk-Hartz and LaMagdeleine, both professional educators, will write and direct the piece, which will also feature musical accompaniment from guitarist Dave Pelsue. 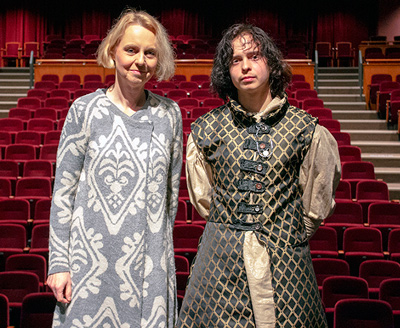 Award-winning jazz pianist-songwriter Monika Herzig and her son Zackary will create music and choreography inspired by the family’s journey through Zackary’s gender transition. Zackary, a recent graduate of the Circadium School of Contemporary Circus in Philadelphia, will design the costumes and perform with live musical accompaniment on the Cyr Wheel, a large metal hoop in which the performer stands to roll, spin and perform. acrobatic movements.

A place in time

Nicholas A. Owens and Lalah Ayan Hazelwood with the Kenyettá Dance Company

Under the artistic direction of Owens and Hazelwood, the Kenyettá Dance Company presents works that spark conversations on social, political and spiritual topics. This four-part piece will incorporate contemporary, modern, classical and African dance, as well as creative costumes, video projections and live and recorded music, to address systemic oppression with a message of hope and promise. that empowers the public. 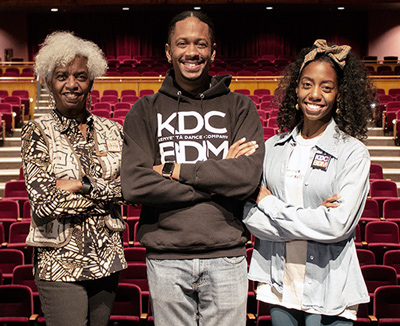 (From left) Vanessa Owens, Nicholas A. Owens and Lalah Ayan Hazelwood of Kenyettá Dance Company are the creators of A place in time. (Photo provided)

“In this inaugural year of New Works, we were gratified by the strong response we received from the local arts community,” said Jeffrey C. McDermott, president and CEO of the Center for the Performing Arts. “The caliber and creative range of the submissions was remarkable and certainly challenged the judges. We look forward to expanding the program in the years to come.

All three bands will perform at the June 4 event at 8 p.m. and join in a talk show to close out the evening. Tickets are $25, available at the Center’s Fifth Third Bank counter, online at TheCenterPresents.org and by phone at (317) 843-3800. The live stream of the performance will be available for free on the Center’s website and on social media.

New Works is supported by the Allen Whitehill Clowes Charitable Foundation and by Doug and Jayne Ann Wilson.

About the Center for the Performing Arts

The mission of the nonprofit Center for the Performing Arts is to engage and inspire the central Indiana community through meaningful artistic experiences. Its campus in Carmel includes the 1,600-seat Palladium Concert Hall, the 500-seat Tarkington Proscenium Theater and the black-boxed Studio Theater. The Center presents and hosts hundreds of events each year, including the The center presents series of performances, featuring the best of classical, jazz, pop, rock, country, comedy and other genres. Educational and experiential programming for all ages includes children’s concerts and camps, book clubs, lectures, and music and dance lessons. The Center is home to the affiliated Great American Songbook Foundation and provides space and support services to six resident arts companies. More information is available at TheCenterPresents.org.

13 hours ago Frances A. Brown

13 hours ago Frances A. Brown

Saratoga Performing Arts Center Reflects on 2021; celebrates the full return of its resident companies and the season in 2022 – Saratogian